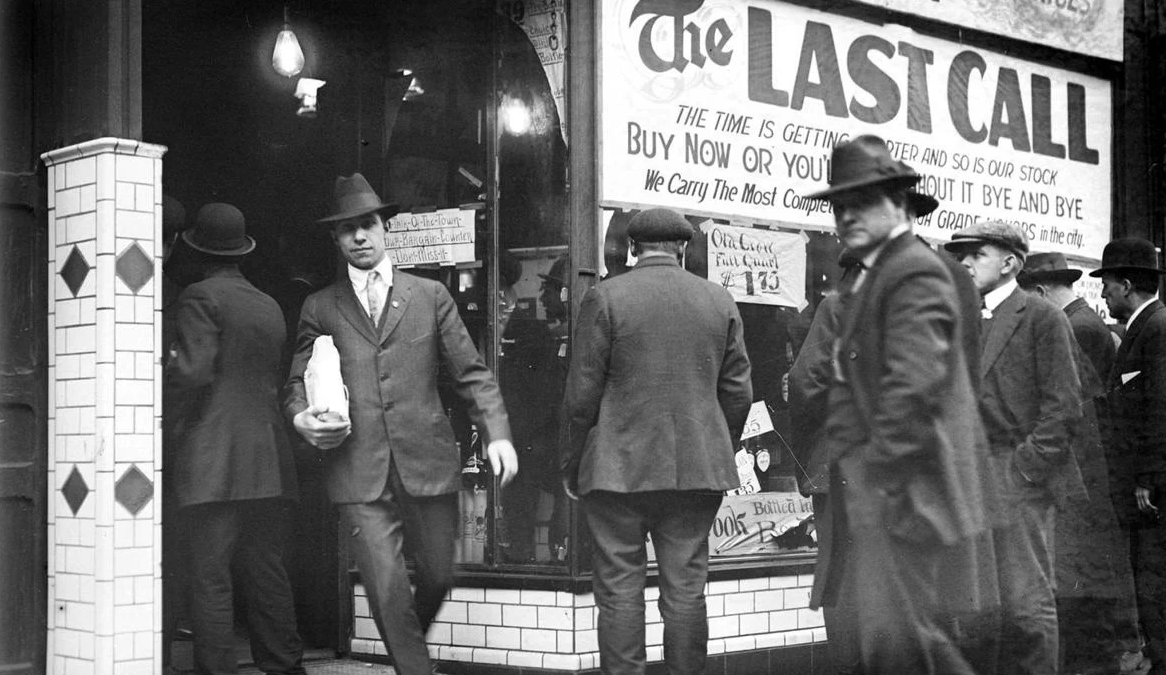 I originally had this scene follow the party at Ernie Willoughby’s mansion. Her mother has injured herself badly enough that she will require more than Adele’s skills, but Adele has to work up her nerve to go out in the darkness to find the doctor. She still has the startling memory Ernie’s knuckles, bloodied from violent use. In this scene, Adele has not yet been hired by the doctor.

When it was time for her to walk home, she decided to take the longer path, which would take her along the river’s edge, past the wall to wall bustle of the docks and the chain of boats puttering to and fro. She wanted to be distracted by the workers, and she wanted to stay away from the main road, where she might see Ernie. The sun was setting, but the rumrunners weren’t done for the night. All day, every day, trucks backed up to the edge of the dock, loading crates of liquor onto boats, and at the other end of the dock waited the scout car, always on guard. She heard the coarse but contented chatter of men heading out to make easy cash, and she envied their sense of adventure. Because of course, the cash they were after wasn’t truly ‘easy’. Past the dockyards and across the water waited the Detroit authorities in their quick motorboats—not quick enough, though, Guillaume liked to tell her. And hiding in the weeds were the jackals, men too cowardly to be called rumrunners, choosing instead to simply steal others’ stock. Every man on the water and in a truck carried a pistol. Most of the bigger, more successful boats had cannons up front. No, there was nothing easy about prohibition cash.

When she got home, her mother was in her bed, calling out. “Finally you’re home. Please come, Adele! I’ve gone and done something stupid, and … oh, it looks terrible, Adele. Please come.”

A half hour later, Adele paced outside her mother’s bedroom, hating herself. On the other side of that door, her mother lay shivering and sweating, lit up with a fever. She’d cut herself, and now her leg was swollen and turning all different colours. Adele had done all she could to help, but she needed a doctor. Guillaume was out working, so it was up to Adele. Yesterday that wouldn’t have been a problem. But it wasn’t yesterday anymore. It was today, and all she could think about was Ernie Willoughby’s bloody fist. She was too afraid to go. The knot that had tied itself in her stomach that morning had tightened, growing heavier over the hours. She was all nerves. When she heard a noise, her heart leapt. When a shadow passed, she fought the urge to dive into the undergrowth and wait for whoever it was to pass.

“Stop it,” she whispered, clenching her hands together as she paced.

“Adele?” Her mother’s voice wavered. “Haven’t you left yet?”

“I’m going, Maman. I was just …” She floundered for some kind of excuse then grabbed her coat. No excuse would be good enough if her mother didn’t get care in time. “I’m leaving now. I will be back soon.”

The car jolted to life with the first crank then roared eagerly when she pressed down on the accelerator. Her palms slick with sweat, she flicked on the headlights and focused on the dark road ahead. There was no point in driving slowly, so she kept up her speed all the way. For a little while she focused on the drive, on the jewels of Detroit sparkling across the river, but Windsor came upon her soon enough.
Dr. Knowles lived at the far end of Pitt Street, one of the the busiest sections of Windsor. It was Saturday night, and as she drove down the street with her windows open, the air was ripe with alcohol and laughter, the whoops of tipsy, kiss-curled ladies blending with a jazz band’s version of “Bye Bye Birdie”. This was a night for fun, for friendship and dancing, she thought sourly. It wasn’t one for chasing down doctors … or hiding from gangsters. When was the last time she’d really had fun? When had she last laughed with a man and thought about kissing him? She couldn’t remember any since being home. The last time she’d felt anything like that was back in 1917, when she’d taken care of Jerry Bailey – and he’d taken care of her as well. He’d been so kind, helping her after her devastating loss. He’d seemed to understand the pain Minnie’s passing had caused, the guilt that had taken ahold of Adele. He’d helped her move past it so she could think clearly again. She’d thought of him off and on since the last time she’d seen him, gazing back at her from the back of a truck, on his way back to the war. She hoped he was still alive.

When she reached Dr. Knowles’ house at last, she parked behind his car then hopped out and ran to his door, always scouting her surroundings. She knocked quickly on the door, then shifted from foot to foot as she waited.

After what felt like an eternity, an older woman opened the door. “Good evening.”

“Mrs. Knowles? My name is Nurse Savard. I’m sorry to be bothering you so late, but I’m looking for the doctor. It’s my mother, you see. She’s—”

“Not here,” she said, stepping back. “It’s Saturday night, so he’s gone out.”

“He doesn’t go too far, because he prefers to walk. Somewhere down this street. Just pop into the roadhouses as you go.”

This time she had to park closer to the action, and it took a few minutes before she could work up the nerve to get out of the car. This is ridiculous, she told herself. He might not even be there. He was probably at his mansion, counting money, or whatever he did for fun.

She turned off the engine, climbed out, and headed inside, never sure if danger was greater inside or out. She peered fruitlessly around the men with their slicked-back hair, stared awestruck at the marvelous sight of women in their short hair and shorter skirts—‘flappers’, they were called—and tried to keep her feet beneath her as the happy crowd jostled her. In vain she searched for the doctor’s familiar short, bald figure, picturing him without his regular white coat. Frustrated, she finally went to the bar and asked.

“Haven’t seen him tonight,” the bartender said. “Try the Westwood.”

She decided to leave the car where it was and walk. Everywhere she went she saw people having a wonderful time, and every roadhouse swelled with music and laughter. When at last she got to the Westwood, she spotted the doctor, engaged in what appeared to be an intense poker game. As she moved toward the group, he leaned in, gathering the winnings in the middle of the table and giving everyone a good look at his new dentures.

“Dr. Knowles,” she said, sliding through the crowd to his side. “Dr. Knowles, I hope you don’t mind, but I need—”

The doctor glanced up through his dirty spectacles, blinking against the light. He was a sweet old man, with white tufts of hair over his ears and under his nose, and a patient, expectant smile. “Oh, hello dear. It’s Nurse Savard, isn’t it?”

“Yes, sir. I’m terribly sorry to interrupt, but it’s my mother. She’s injured herself and I’m afraid the wound is badly infected—”

He chuckled, smiling around at the rest of the table. “I don’t see as it’s any trouble at all, dear. In fact, I imagine these gentlemen will be somewhat pleased to see me go.” He got to his feet, and she was surprised to see a medical bag already in his hand. “Ah, you have caught me at a good time. I was visiting the Widow Harvey just before coming here, so I am ready to go.”

“Shall I drive you then?” she offered, hurrying him along. He was a good doctor, but she could smell the whisky rising from his pores. She’d better get him to her home before he fell asleep.

“Yes, Nurse Savard. That would be lovely.”

She led the way, meandering between the crowds with him chattering pleasantly behind her, when Ernie Willoughby suddenly came into view, stopping her heart. He was near the bar, speaking with a group of men. She looked away, hoping to escape his attention, but when she looked back, he was staring at her, looking pleased.

“Mademoiselle Savard,” he said, stepping away from his group and holding out a hand. “What a nice surprise. Are you here on your own? Can I buy you a drink?”

“She’s here for me, Willoughby. Step aside, man. We’re on a mission.”

Adele was surprised to hear annoyance in the gentle doctor’s voice. Dr. Knowles pushed past, leaving Adele to blink up at Willoughby in surprise.

“Nothing too terrible, I hope.”

“I’m sorry,” she said, hoping to follow the doctor right out, but Willoughby caught her wrist.

“Are you all right?”

She flushed, hoping he wouldn’t read her near panic. “I’m fine. It’s my mother. She hurt her leg.”

He still hadn’t let go of her wrist. “Ah. I’m certain she’ll be fine, thanks to you. Listen, Adele, I really enjoyed seeing you last night.”

“Yes,” she said quickly. “Me too. It was a wonderful party. But I really do have to go now.”

“Uh.” Her throat jammed, but he was waiting expectantly. “I’ll have to see. Would that be all right?”

“It will have to be, I suppose,” he replied. “I’ll drop by the doctor’s office tomorrow and get your answer then.”

This was a man who wouldn’t take disappointment lightly, she understood. She was going to have to be very careful about distancing herself from him. One step at a time.

“That would be good. Thank you so much for understanding,” she said, postponing the inevitable. “I’ll see you tomorrow.”

He released her wrist, and she bolted to the door, then outside to where the doctor stood. Before she started the car, she lit a cigarette, needing to calm her nerves, but she couldn’t stop her hands from shaking. She still felt the imprint of Ernie’s fingertips around her wrist.

“Have you got a chill, Nurse?” the doctor asked as she drove.

“Oh. No, no. Well, maybe yes. It’s just the night air. And my concern for my mother. Thank you so much for coming, Doctor. It’s not too much farther.”

He peered out his window at the lights across the river, a contented smile on his face, and they settled into a comfortable quiet. She hoped it was comfortable for him, at least. Adele’s mind was in chaos, consumed by the last day and a half. She was frustrated by her new, biting fear for everything around her—she’d survived the war, for heaven’s sake. But even now, as they drove the dark road toward home, shadows leered at her from the trees, and she feared every one of them.