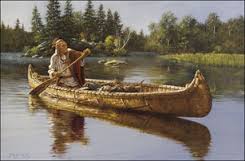 In the alternate story, Me’tekw didn’t find Amelie until after she had burned the cabin.

Morning brought sunshine. I lay stubbornly wrapped within its soft, pressing blanket as long as I could. When I was ready, I rolled onto my side, then my stomach as rounded pebbles shifted and pinched beneath me. My mouth felt glued together by thirst, so I dipped my fingers into the river and wiped them over my lips, coaxing them open. I scooped water to my mouth, and it cooled my lips, my tongue, my throat even as its icy edge spiked agony through my teeth.

But life was no longer enough. Everyone I had ever loved was gone. I was truly alone.

Pressing my cheek into the pebbles, I closed my eyes and wept. I cried for my brothers, my sisters, Papa, and Maman. I grieved for the people of Grand Pré, for the fields, for the wind, for the storms of my home. And I wept for Connor. When I could cry no more, I slowed my breaths, tried to inhale smoothly through the jagged catches in my lungs, and I fell asleep again. By the time I awoke, the sun had travelled halfway across the sky. I could wait no longer. I had a job to do.

I’d closed the door out of habit the night before, I realized. Even in my delirium I’d known to ban the night creatures from the awful scene within, though I’d had no care for myself, curled helplessly in my coat at the stream’s edge. Now I opened it and left it open, needing God’s sunshine and air to flood the room.

I couldn’t simply leave them here like this. Someone might come upon the house and discover their remains, see what was once beautiful as grotesque. What was I to do, though? Just the thought of trying to dig a hole was inconceivable to me, since I could barely stand without some kind of support. A chill passed through me, a sharp, not altogether unpleasant contrast to the fever that had so recently burned through me, and I looked toward the fireplace. A thought came to me, as gentle as a whispered suggestion.

I wouldn’t bury them. And I didn’t think what I planned was a sin.

The fire had burned out long ago, but kindling and a few logs still waited resolutely by the hearth, awaiting their final purpose. As I had so many times, I set and lit it, watching in a daze as small flames caught and stretched up the blackened chimney, spreading an intoxicating warmth. More logs, more snapping flames, more ravenous heat. I pulled a chair a few feet away so I could sit and watch the inferno grow, feel its pressure, its power. It wasn’t until the coals began to collapse, tumbling upon one another in pulsing, glowing bricks, that I stood again. Using the small fireside shovel, I scooped up some of the coals and carried them across the room to the cot.

In my mind Giselle still giggled as she, Marie, and I chased each other through the deer trails, breathing the crisp Grand Pré air. Sometimes our brothers had leapt like bears from the foliage, and we’d all dissolved into shrieks and helpless laughter. Sunlight falling on curls, sparkling in wide, laughing eyes.

“Giselle,” I whispered, touching my little sister’s brow. Her cold, dry skin no longer swelled red with the heinous welts. She looked at peace.

Papa lay still as well, his solid muscles wasted, his cheeks sallow and loose. I had never seen him weak before—except when I spoke with him about my little brothers, then of Maman and Claire. I couldn’t touch him. If his eyes had been open I might have seen him somewhere within, but the body lying wasted before me was not Papa. I looked up, imagined him watching me from beyond the weathered beams.

“I shall make you proud, Papa,” I promised.

Perhaps I was a coward, but I could not watch what I was about to do. I stooped and picked up the blanket, then carefully draped it over the faces of the ones I loved. My hands shook as I tilted the shovel and poured pulsing coals onto the bodies. It wasn’t a heavy task, but my convalescence was only in its infancy, and emotion threatened to overwhelm me too soon. I must see this job done before I could give in to my own selfish needs.

The coals sampled the fibres, chewing small orange rings around themselves. Finding purchase, they ignited and burrowed hungrily through. My family’s voices came to me as their bed burst into flames. Memories reached out like hands to hold, and for a heartbeat or two, I considered staying with them, letting the flames take me as well.

Beyond the house existed a strange land. Not a familiar wilderness like Grand Pré, where I could have found my way in the dark through miles of rock and glen, but a place where I knew no one and nothing. Except fear.

But the heat was too much, and the smoke curled into my lungs, scorched my weeping eyes. Hacking coughs shot pain through my head and grasped at what little strength remained. I grabbed my coat and another blanket and moved toward the door as the timbers caught. Tongues of flame licked the walls and tasted the cracks in the ceiling. As I stepped outside, the house erupted into a full blown funeral pyre, turning the sky a boiling black.

The yard around the house had been cleared years before by the previous owners, meaning the trees were, for the most part, far enough from the inferno. Sparks fizzled out on grass too wet to catch. I stumbled from the wall of heat and watched until I could bear it no longer. When I collapsed on the rocky shore I numbed my hands in the rushing stream and swallowed all I could. I flushed more water onto my face, over my hair, over my body. It could either save me or kill me, but I couldn’t stop. When my ablutions were done I sat back, shaking with cold. The cold and the heat rolled over each other, battling for me, and I fell to my side. For as long as I could, I watched the river, watched it flow, watched it forever journey past.