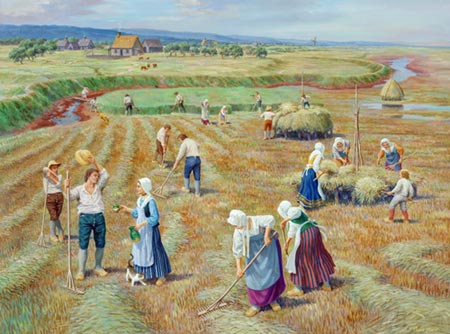 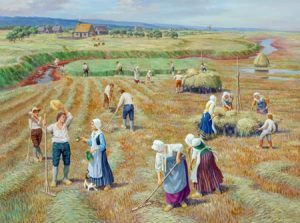 My papa, Charles Belliveau, was sixteen and still living with the Mi’kmaq when he met my maman. Sylvie Fontaine had grown up only a few houses from where he had been born. The story goes that he saw her walking into the church with her parents, but since he wasn’t properly dressed to enter the house of God, he waited outside for the service to be over. Papa never told me much more about how they eventually met, except to say that she was the most beautiful thing he’d ever seen. Every time he said that, she blushed as if no time had passed at all. That alone was reason enough for us to ask him to tell the story again and again.

For her he’d shed his buckskin, cut his hair, reverted to his mother tongue. When their engagement was announced, the entire community got together in the traditional way to build the newlyweds a house.

Papa was good with the animals, and he put together a garden which my mother would always tend, but his hands were usually busier with chores brought to him by the sea. He was a fisherman for most of the year, and sometimes he helped with boat building. I remembered the first time I saw the long, tapered trunk of a white pine stretched out beside our barn, supported by thick wooden blocks. It would someday be the mast of a great ship, Papa told me.

This wasn’t the first or final mast I saw him build. I never tired of admiring his obvious skill. For weeks I watched him work, sweating through his shirt under the summer sun. Using his adze, he squared the wood then cut it down to sixteen sides in preparation for planing the edges into a round shape. My brothers and I helped him sand down the marks his tools had left until at last he declared himself proud of the finished product. When the other men came to carry it away, I pictured it adorned with sails, bravely cutting through the Atlantic swells; my father’s mast would always guide the travelers safely home.

After my parents’ wedding, we children weren’t long in coming. I was the fourth child, following André , Henri, and Marie. Mathieu and Giselle were born after me. By the time I was born André was already five. When I  was five, he was ten, and I worshipped everything about him. He was like Papa with his quiet strength, like Maman with her wisdom. Though I am certain now that he would much rather I not follow him constantly, he never showed any annoyance with me.

I wished I could say the same for myself when Giselle was born exactly five years after me. Sweet as she was, I had no patience for her constant chatter and butterfly dances. I fled whenever I could, and often I went up to the Mi’kmaq village. There we had another family. My Mi’kmaq sister Mali and I shared parents, meaning we each had two fathers, two mothers, and twice as much love as the other families who did not approve of the people of the forest.

Like me, Henri preferred the Mi’kmaq way of life, and we shared a best friend in Mali. He learned to hunt and fight their way, and he knew every one of their legends better than he knew the Bible stories. In the summer, when his skin darkened under the sun, he could almost be mistaken for one of them. My dear Henri was the dark opposite of André: acting before thinking, speaking out of turn, but always able to do it with a grin. He was a bit of a rebel, but I adored him.

When Maman married Papa, he brought with him a culture based on the idea of living by example. He taught her of the Mi’kmaq’s belief that every living thing worked together, and she adopted that into her way of thinking. Maman was not only wise, she was kind. And lovely. Maman was the kind of person whose soul was as beautiful as her face, and that was beautiful indeed. I suppose she would have to have been, allowing a scrubby blond Mi’kmaq to woo her, but I imagine Papa was charming. And it was obvious to everyone she loved him with all her heart.

I was not the quiet, dutiful daughter my parents had in my older sister, Claire. Nor was I the delightful, talented younger sister. That was Giselle. Giselle was twelve now, and I was seventeen. She acted young for her age, and we had little in common. Both my sisters were fair in colour, their long golden hair lit by sunshine, their bright blue eyes clear and wide. My hair was dark under my cap, and though my eyes were blue they were never lowered demurely, and every one of my emotions was plain to see through them.

Claire and I loved each other, of course, and we had played well together up to a certain age. Then she discovered boys, and her attitude changed so much I had trouble interesting her in any of the games we’d played as children. She started to take extra care when she was dressing in the morning, and I teased her when I spotted her batting pale eyelashes at one of the boys.

I was stubborn like Maman, inquisitive like Papa. Maman called me impatient, and I suppose that was fair. I did not like to waste time that could be better spent. I couldn’t sit still long, but I was not driven to move in the way that Giselle needed to move. She was a rabbit, hopping from one thing to another without purpose. I was a hummingbird, direct and determined. I needed to see everything that was happening. If we were preparing bread in the kitchen, I needed to know why Henri was running so quickly outside the window. If I was at the weir, I longed to climb the hill and scout for my younger brother, Mathieu, who was constantly finding trouble. When my parents were busy, I needed to keep my eyes on both my younger siblings. Matthieu knew not to go near the aboiteaus, but Giselle was unpredictable. When I was her age, Papa had told me to keep my distance from the openings to the dikes or the sea eels might bite me. He had warned us all, and so far we had all been free of the nasty things, but perhaps after five children he had tired of reminding us. Had he ever mentioned the eels to Giselle? Just in case, I took it upon myself to constantly remind her, to make sure she showed respect in the dikes.