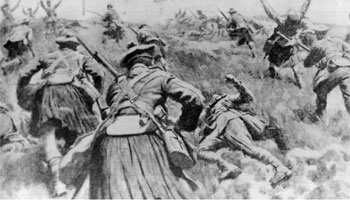 Not only did I originally have an extra brother in the original story, but the two of them also found Connor during a battle. Just as Connor is telling Michel that he is a friend of Amelie’s, Henri sees them and automatically attacks Connor. But now, since Connor has revealed himself as a friend, they realize they need to rescue him in case he knows more than he’s had a chance to tell. 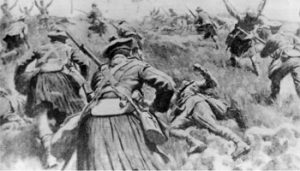 All at once the air was stolen from Connor, as if he’d been punched in the back. He frowned at Michel, confused, but Michel was staring at Connor’s torso, his mouth open. Connor looked down but saw nothing.

“What?” the voice sounded incredulous. Henri came around in front, unsure, then he frowned into Connor’s face. In one hand he held a bloodied knife.

“You are her brother,” Connor said, strangely out of breath. “Henri.”

Henri’s eyes widened. “I remember you. Our axe and muskets. You took them.”

“And I brought them back,” Connor reminded him. Suddenly he was aware of a sharp, burning agony in his back. He reached around, searching for the source, and his hand came back covered in his own blood. “What did you do?”

Henri looked pained. His eyes dropped to Connor’s bright red coat. “I thought you were …”

Stars appeared in Connor’s vision, and though he tried to blink them away, they returned with more vigour every time. He grunted with pain then reached toward his back again, but he couldn’t quite stretch that far. The ground rolled under him, and he dropped to his knees.

“Dizzy,” he managed, his voice hoarse.

Connor saw Henri nod then look up at a third man, and it came to him that he was another Belliveau. In his dwindling consciousness the men’s images rounded around the edges until they changed to those of Amelie, her delicate jawline and smiling blue eyes. As reality began leaking from his mind, he closed his eyes to contain the memory and hold her tight.

Smoke wafted into his dreams, lit scenes of forests in flames. For a moment the heavy drug of sleep and pain held Connor down, forced him to ignore the fire raging around and within him, then he inhaled again and the bittersweet tang of burning junipers filled his senses. He jerked awake then cried out at the pain cutting through his back. He sank onto his side on a soft bed of furs, and recollections of his journey began to seep back into place. He recalled hearing the Belliveau voices along the way, asking questions to which Connor couldn’t begin to reply, then musing amongst themselves about the possible answers. Amelie’s name was spoken many times, in different tones. Connor’s consciousness had dwindled with every step; he was losing a lot of blood. Too much, he thought, and he’d crashed helplessly to his knees. Evidently his rescuers had deemed him worth saving, for one dropped him over his shoulder and carried him from there. Glimpses of the pathway moving like water under the backs of worn moccasins came to mind, but he didn’t recall landing here; he had no idea where “here” was.

He forced his eyelids open, seeking the source of the smoke. A large bowl sat on the ground a few feet in front of where he lay, and within it had been set a bough of juniper. It had evidently been burning there, but the flames were gone now, leaving only smoke. His eyes went beyond the thin line of smoke to the walls around him. They seemed to be made of a faded white sail, and when his gaze travelled he realized he was in a wigwam. He’d heard of these, seen drawings, but had never imagined being inside one.

A young child walked in, sat before him. His shining black eyes shone with curiosity.

“Who are you?” Connor asked. His voice was hoarse and unintelligible, so he asked a second time.

The boy squinted. “Who aoo.”

“Is that your name?”

Connor closed his eyes, trying not to laugh. Clearly a conversation was out of the question. He shifted again, and when he flinched the boy rose then squatted by his side. The little hands went to his injury, gentle and cool, and Connor strained to see what he was doing. He could see the corner of some kind of bandage made of bark. It seemed stuck on the skin, perhaps with sap.When the boy lifted one corner to peek, Connor gasped involuntarily, and the bandage was quickly put back into place.

“Meske’i,” he said, looking sheepish, and Connor assumed that was some sort of apology.

“Water?” he tried, then cupped his hand to his mouth in illustration.

The boy jumped to his feet then dipped a bowl into a bucket of water and brought it over. Connor curled his fingers around the bowl, bringing it slowly to his lips. His hand shook violently, but the warm rush of water through his lips and throat was worth the effort. He held out the empty bowl and it was refilled. Moments later, Connor was asleep.

When he awoke, the boy was gone, and the light inside the tent had dimmed. A small fire crackled in the centre, its shadows dancing off the canvas walls. Connor’s head pounded, his vision swam. He blinked slowly, hoping to clear it, and saw the boy had been replaced by a young woman. Her gaze was open and frank, but he sensed no hostility. After the last experience, he assumed she spoke no English, so he did the same thing he’d done earlier, asking for water with his hand. It was much cooler this time, a gift from God. Every one of his pores screamed for moisture, but his rising inner heat shoved it all out as sweat. He lay back and she touched his brow then his cheek with the back of her hand. Without any change in her expression, she reached into another bowl and brought out what appeared to be wood shavings, soaking in something. She pressed the cool, wet strips over his head then tied a soft leather covering over it, holding the stuff in place. Her touch was lovely against his hot skin, and whatever she’d put on his head smelled sweet and soothing, like peppermint.

He lost track of days and nights, barely recognizing the shapes and colours of people tending him. He either shook with an uncontrollable shivering that extended from his feet to the top of his head, or he struggled desperately to free himself from the heat of the blankets. He was hungry, but could keep nothing down. He was thirsty, but the water swiftly turned to sweat. At one point they poured something down his throat until he lost consciousness, and in the morning he awoke with a sharp new pain in his back. At least the pain didn’t radiate, didn’t leech into his veins. They had done something to the injury, he supposed, opened it up and cleaned it perhaps. Maybe the fever would pass after all.

The people assigned to monitor him changed constantly, but it didn’t matter. Nothing mattered but sleep. He woke and drank, but often the water—or strange flavoured tea—was poured into his mouth by steadier hands. His dreams were dark, violent things where he was constantly running through tangled brush or swimming against rushing tides, narrowly escaping knives and wild beasts. He ran to find Amelie, who he sensed, but never saw. And every time he looked at his hands he was ashamed to see they were covered in blood.

The only person to return often enough that he remembered them was the girl who changed the packing on his head and forced tea through his lips. After a while he noted with a strange mixture of disappointment and relief that her fingers didn’t seem as cold as they had before. He no longer felt rivers of sweat running down his face. He began to eat and resolved to sit upright the following day.

The next morning he was awoken by two men speaking rapidly in French.

“Look who is awake,” one said.

“You talk in your sleep,” muttered the other.

Tension pulled tight between all three men. Connor shifted his gaze to Michel. “Is André with you?”

Michel shook his head and glared at his brother. “But I am sure wherever he is, he is doing better than you,”

“Don’t look at me that way. I already apologized,” Henri snapped. “And look. He is fine. He’ll be back in his red coat and killing our friends and family before you know it.”

Michel glared at his brother then took a deep breath. “We agreed. You will give him a chance to explain himself.”

Connor said nothing. Balance was important here; he would have to tread carefully. No one would believe him if he burst out with a declaration of love for their sister—they most likely wouldn’t allow it anyway. How else was he to convince them that he meant them no harm? That the colour of his coat didn’t match his heart?

The flap covering the doorway folded back, and the quiet Mi’kmaq girl came back inside. She glanced at Connor, and he saw a gentle smile on her face for the first time. She seemed glad to see his return to health.

“I see no reason to give him anything,” Henri muttered. “We’ve already given too much.”

“Oh, Henri,” the girl said in clear French, shaking her head. She slid her hand into his. “This is Lieutenant Connor MacDonnell. Your sister asked me to pray for him.”

This was a pleasant surprise. Everyone looked at Connor, different expressions on each face.

“Why would she do that, Anna?”

“For the best reason of all, Henri. She said she loves him.”