Eugene in the Hospital 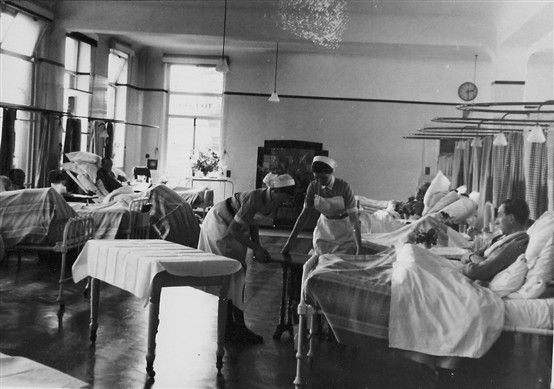 In the original book, Eugene was in the hospital, and the whole family came to see him there. 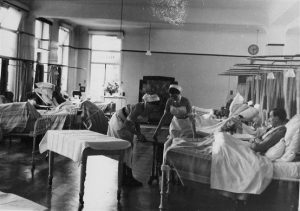 They stayed in Halifax for a week, and even Harry took the time to be with them, to check on his brother and ‘recharge his battery’, he said. Tommy and Uncle Harvey visited them briefly in Halifax as well, but Norman didn’t come. Tommy said he’d thought about it, but he just couldn’t. That made sense, Harry said. It wasn’t just the war that was fresh in Norman’s mind, it was the time he’d spent afterward, living in the cold, unforgiving alleys of Halifax, confused, scared, and alone. Rudi had stayed at the plant, working hard and earning everyone’s trust. Grace was sorry for that. She enjoyed speaking with him, watching him, feeling the zing of electricity when he touched her. But the timing was wrong, and even with everything Uncle Mick had done, they all agreed it was better for him to stay home.

Linda came in to the city, even spent a night at Uncle Mick’s so she could be at Eugene’s side late at night and early in the morning. After she’d spent time with him and listened to the doctor’s calm diagnosis and prediction for a full recovery, she went home. Rudi was not mentioned the whole time, and that made all of them nervous.

On the seventh day, the day after she left, Eugene woke up. By then most of the bruises were gone, and he’d dropped a few pounds, but there was nothing wrong with his mind. He was alert and aware when his family came in to see him, and he hugged their mother when she tearfully gave him a bundle of flowers. A nurse wandered by a moment later and rearranged them in a vase by his bedside.

“I could eat a horse.” He gave his twin a teasing frown. “Shouldn’t you be at work?”

“Your brother has a new job, apparently,” their mother said. “He’s a hero.”

She brought out the newspaper story Grace had read a dozen times, crying with every read. Uncle Mick sure could write well. Norman took the paper, and they all watched him. When he was finished he folded it onto his chest, took a long, deep breath, then looked up.

“Thanks, big brother. I guess I owe you one.”

“Nah.” Grace had never heard Harry’s voice crack before—not since he was just a kid, just acquiring a man’s voice. The sound brought an instant rush of tears to her eyes, and she saw her mother reach for her handkerchief as well. “Just hearing you admit I’m the big brother is good enough.”

“You have to go back soon?”

“How long have I been here?”

They told him. He was shocked, but his reaction was almost apologetic. “You okay being off for this long?”

“It helps to have a little rank, but yeah. I have to get back soon. My twenty-four hours has kind of gotten away on me, I guess you could say. Now that I can see you’re just about up and at ‘em, I’ll go. Gotta go save the world and all that.” He swallowed. “Really, I figure I’ve done my job already since I saved you.”

Eugene tried to help him out by waving a hand. “Nah. You didn’t need to bother. I would have survived. I made you a promise, didn’t I?” He made sure Harry was watching. “Now you have to keep yours.”

“I never break promises,” Harry reminded him. “Especially the ones I make to you.” He held out a hand, and Eugene took it, joining the brothers again. “I’ll be home soon. Look after my family for me.”