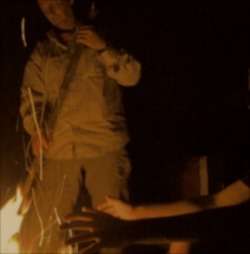 In the first draft of Promises to Keep, I saw one more older brother in Amelie’s household, and when Henri ran to the Mi’kmaq in September he went with his brother Michel. With their freedom came a different kind of prison: from the forest they watched their family’s misery.

Michel kicked at a partially burnt log as it rolled from the fire, frustration blazing in his eyes. Winter was softening the season’s edges, patches of snow and ice receding to reveal optimistic brown sprigs of grass. While blizzards still raged, making everyone long for warmer days, at least the cold was less sharp.

“Three months,” he grumbled. “We need to be doing something.”

Henri had been watching his younger brother go through this all season, and he understood the need for action, but he was the more practical one. There was nothing anyone could do in wintertime. He walked to the woodpile and returned with more pieces, which he dropped in the fire, shooting sparks into the gloomy grey afternoon.

“Soon,” he said for the thousandth time. “We can’t even get a canoe out yet.”

His brother grunted unhappily and adjusted his bearskin robe higher on his shoulders. The coat made him look larger than he was, and the black fur blended with his hair. Both of them had grown their hair longer over the winter, though it wasn’t long enough to braid yet.

“Maybe there’s something we could do from here.”

Michel looked up at him from under heavy lids. “Like what?”

“I don’t know. If we could get to the fort maybe we could at least find out where they’d taken them.”

“Just walk down and ask?” He nodded sagely, ridiculing his brother’s idea. “Sure. That sounds reasonable.”

Ansale chuckled and stared down at the trap in his hands, make adjustments. “Yes. I’m certain he will give you directions. Of course you will be shackled and tossed in a cell first.”

But Henri had been thinking about this for a while. When the snow was mostly gone they would set out in search of their family members, but with all the different ships, how were they to find out which ones carried them? And where they’d ended up? Someone must have a list of that information somewhere, and Henri was determined to find it.

“I fixed your moccasin,” said Anna, ducking out of her wigwam. She walked to Henri and put her arms around his neck, temporarily distracting him from his thoughts. “Would you like to come inside and try it on?” He chuckled, and she grinned against his lips. “You know,” she suggested, “inside? Where it’s warm?”

How could he resist such an invitation?

When they had warmed the wigwam even further, and they both lay content in their shared fur blankets, Henri rolled onto his stomach and gazed into her dark eyes. With his fingers he combed the hair back from her face, and she sighed, making him smile. How he adored her. He would marry her in the springtime, despite having none of his own family there besides Michel. It was a regret, but an unavoidable situation. After all, Anna already carried their baby within her.

“I heard you speaking out there,” she said quietly.

“Of course you did. You have the ears of a bat.”

She smiled up at him. “I like to hear your voice.”

He leaned down just enough to kiss her lips. “I was just talking nonsense.”

“Oh?” He kissed her again, but she only laughed and pushed him away.

“Not that kind of idea!” she said, giggling. She switched positions with him, rolling onto her front and looking down at him. “Let us go into the church with a gift for Winslow.”

He frowned. “What are you talking about?”

“They would lock me up! Are you trying to get rid of me?”

She skimmed cooling fingers down his naked chest, raising bumps all over his skin, and he shivered. “Have you looked at yourself lately, Frenchman? You look like one of my brothers. The English will never know.”

“And what will we do there?”

She shrugged. “Keep our eyes open and listen. They do not think we can understand their foul tongue, so they will not be careful. Maybe we will discover something.”

They had watched the village area from afar, looking for anything, but there was little left of the world Henri had known. The smoke was gone, but disrespectful black patches of devastation still carpeted the vanishing snow. The church and the priest’s house still stood, of course, since the English had taken possession of them. But Henri’s home, the farm … it was all gone. Perhaps if he ever managed to find his family again he’d start fresh with Anna. Maybe they could follow her family to a new area, resettle somewhere that didn’t stink of English.

It struck him that—as usual—Anna was making sense. After sending away so many people both Acadian and English, few remained around the church area.

“I don’t know if it’s safe for you down there.”

She laughed. “Why? Because of the baby?”

Ansale liked the idea because he liked anything that meant he didn’t have to wait around a moment longer. Michel, too, was excited, but it was decided he couldn’t go. His hair was growing out into a shiny, dark brown mess of curls, but his eyes were a shocking blue, something none of the soldiers would be able to miss.