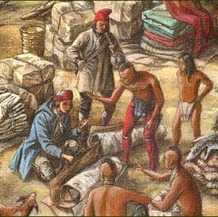 Amelie introduces us to how the Acadians and the Mi’kmaq coexisted.

When my people first came to this land over a hundred years ago, they brought with them the wisdom of their homeland. The founding fathers settled in a land on the edge of the ocean and decided the marshy grasses—which revealed themselves twice a day when the tide receded—would become our fields. They called our new home Grand Pré, or “Great Meadow.”

When I was very small, Papa explained to me that silt and dirt left behind by millions of departing tides fed the grasses and made the land fertile. The difficulty, of course, was keeping the ocean from stealing our crops. But our ancestors had been smart. Using ferrées, pitchforks, axes, and their powerful backs, the early Acadians spent years building huge dikes to stand against the sea. Ditches were dug through the remaining marshes, and hollowed-out tree trunks reinforced with marsh mud were put in to serve as tunnels. The ends were gated by aboiteaus, little gates which moved with the tide, letting excess rainwater escape into the ocean but not letting the seawater in. Once these were in place, more dikes were built over top using marsh mud and sod. The dikes demanded a great deal of our time, but they were something we could not live without, so no one ever complained.

The Acadians built homes and gardens where no one had been before—other than the Mi’kmaq, who had lived here since the creation of the world. I imagined our settlers would have been nervous at first, meeting these mysterious people, but they had nothing to fear. The Mi’kmaq were a sharing, generous people, and they would have been equally curious about these awkward white people who had stumbled into their home.

The Mi’kmaq and my people have always been at peace. My ancestors did not wish to cut down the forests or fight them for their lands, so the Mi’kmaq watched them create fields from the sea. Even though they were not Christian at that time they must have seen that we were like them, wishing to live in harmony with the earth and its creatures. Once they realized we could work side by side, they taught my ancestors the true meaning of living off the land. Through them we learned to build fish weirs and eel traps, even to fish through ice during those frozen months of winter. After they mixed berries into our food, sickness came less often, and the herbs they shared with us eased our illnesses and pains. They traded with us, bringing warm, protective furs in exchange for our metal pots and axes. Through my ancestors the Mi’kmaq learned to worship the Lord, and some even accepted our ancestors’ invitation to join our Order of Good Cheer. We became good friends and neighbours. If it hadn’t been for the Mi’kmaq, we never would have lived to see today.

The British eventually arrived, but as long as they did not cause any trouble there was plenty of land to go around. Declaring victory over the French forces at Fort Louisbourg had whet their appetite for this land, and they decided to stay. When the French won it back three years later the British reacted by founding Halifax—right in the Mi’kmaq moose hunting territory.

Tumas’ expression tightened every time he spoke of this, so I only asked once—but I heard the story many times over the fire. I imagine the subject burned so hotly within his heart that the flames brought it to the fore. His rage was a frightening thing to see, I must admit. I loved the man like a father, but the way he paced, the way his massive hands clenched while he spoke made me want to flee his furious gaze. He argued—against no one, for none of us would dare contradict him!—that Halifax could not exist. He said a treaty had existed for a hundred years, keeping the Mi’kmaq and British on friendly terms, but this Halifax had been established without any negotiations at all. He raged at the presumptuous British, at their disrespect for the land and its people. On some nights, when he simply could not sit quietly anymore, the rants changed form. His expression set, he went off into the forest with some of the other men. I knew they would be discussing the British, and not in pleasant terms. Sometimes he did not come back until the following morning. Then he was quiet, focused on his own private thoughts.

It wasn’t long before the Mi’kmaq declared war upon the British. From that moment on, the Mi’kmaq and the British had fought, since the British were not willing to hand back the land they had claimed. As the conflict grew even more heated, terrible, forbidden whispers about scalping on both sides were passed around Acadian hearths. Someone once told me that the British were paying for Mi’kmaq scalps, but I couldn’t—wouldn’t believe such a repugnant idea. Who could ever … ? No. It had to be a lie.

As Acadians we were determined not to get involved but to live in peace with everyone around us. We still brought food to the soldiers as we always had, and we continued our close friendship with the Mi’kmaq, though our visits became less frequent and were sometimes strained. Mali had warned me things were getting worse. She said the Acadians would soon need to choose a side, but I hadn’t wanted to talk of such things with her or with anyone else.

I didn’t understand. As far as I could tell, nothing had changed.