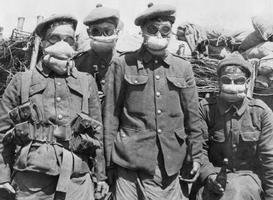 The 2nd Battle of Ypres (April 22 – May 15, 1915). Danny finds himself cornered by the Germans’ insidious chlorine gas attack and facing a very strange solution.

Interesting fact: During the Battle of Ypres, John MacRae spent twenty minutes jotting down the world’s most famous war poem: “In Flanders Fields”.

In April 1915, Danny’s troop arrived in Ypres, France, joining the French and British where they held back the German line. If it hadn’t been wartime, the night could have felt almost celebratory. German fireworks lit up the dark so the sky sparkled orange and red, raining fire. Flares burned through clouds of smoke and the pop pop pop of machine gun bullets whizzed over Danny’s head like horribly amplified popcorn. He had learned the different sounds shells made, the noisemakers and the screechers, learning which gave him advance notice, and which didn’t. The screechers were the ones to watch for. Those shells carried shrapnel, bits of metal that cut through anything and anyone. Men, horses, mules – anything in range was sliced apart like meat. The weapons roared over the desolate field for which the soldiers gave their lives, they ripped past the gangly bits of barbed wire, they vibrated the earth until the clay walls of the trenches threatened to buckle. Sometimes they hit close enough that mud and rocks buried everything in the trenches, including the men.

The following morning, though, everything was eerily quiet. The change was so unexpected it felt wrong. Even the grey, clouded shade of the day seemed wrong. Stifling, though it was cold. Danny and the others scaled the trench walls and peeked over the edge, curious, but they could see no action across the way.

“Hey! Would you look at that,” Danny heard from somewhere in the trench.

“The air. Look at the fog along the ground. Ain’t never seen the air go that colour before.”

As Danny watched, a low, thick cloud, the colour of yellowy-green mucous, began to slide toward them from somewhere on the German side. Muttering started up among the men, a nervous shift tightening the strain in the trench as they tried to figure out the possible threat.

“Smoke screen,” Mick murmured, checking his Ross. “Fritz’ll be comin’ up behind that smoke, he will. Get ready, lads.”

It sure was thick, Danny thought. Mick could be right. The whole German army could be hiding behind it and no one would have any idea. Brilliant. On the other hand, that didn’t make a whole lot of sense. Meant the Germans couldn’t see them, either.

“Gas!” someone yelled, and a muted clinking of metal broke the quiet as men began to strap on masks.

“Can you smell that? What is that smell? I recognize that,” said a man nearby.

Danny sniffed. Vanilla? No. Something fruity, but not apples. Pineapple? He sniffed again. Yeah. His mother loved pineapples. His father tried to get one for her every year around Christmas time. Pineapple and … and … Pepper?

“Goddamn,” whispered a voice on Danny’s other side.

Danny peered down at him, raising his eyebrows in question. They called the little man The Professor because everyone said he was some kind of genius scientist. He looked it, too: round spectacles that tended to slide down the thin bridge of his nose, a slender frame supporting a badly-fitting uniform. Danny had never figured out why such a scholarly fellow would sign up for the front line, but he had.

The Professor was looking at the cloud of smoke with an expression of complete astonishment.  “Well, I’ll be goddamned,” the little man said slowly. “I know what that smell is.”

“Pineapple?” asked Danny. The Professor looked at him, blinking hard behind his thick glasses.

They stared at the field, watching the scene before them. The cloud crept closer, slithering low to the ground like a snake. While Danny watched, the snake poured itself over the lip of the French troops’ trench, touching the first ranks of soldiers.

Doc said, “Those poor souls are going to die a horrible death while we watch.”

Then the screaming began.

Men burst from the trenches, stumbling in blind circles, hands pressed to their eyes, their throats, their chests. One by one they collapsed, falling quite suddenly, as if they’d just been relieved of their spines.

Danny’s legs suddenly felt as if they weren’t up to the job of keeping him upright. “So what do we do?” He clutched the Professor’s upper arms and shook him. “Come on, Professor. What do we do?”

“Poison!” someone near Danny yelled. “Put on your masks!”

“Not enough,” the scientist muttered, his eyes glazed. “Not enough. Chlorine gas reaction … what if … if we, let’s say …”

“What’s going on?” Danny demanded, then ducked as machine gun fire started up again. “Jesus. Like fish in a barrel.”

He dared himself to climb halfway up, to strain through his burning eyes and see what was happening, and thought he might get sick. The men staggering on the field contorted, twisting with pain Danny couldn’t begin to imagine. From the other side the Germans were having a hay-day, cutting down the poor souls, leaving a mess of blood and death. From the looks of the men staggering around, Danny thought death might have been a mercy.

What was this new poison? The greenish cloud hadn’t stopped at the French soldiers. It moved like a shadow over the still and writhing bodies, swirling a bit with the northerly breeze, coming closer with every breath. Danny whirled towards the little man and seized his arms again, forcing him to meet his eyes.

The Professor didn’t see Danny; his eyes stared right through. He was thinking hard, Danny could see, and though he was desperate for answers, he thought it best to let the man think. All at once the Professor’s jaw dropped. His reddened eyes popped wide open, then he started nodding as if he was agreeing with someone.

“Yes! Yes!” he exclaimed, stretching his lips into a gleaming smile. He turned toward Danny. “It’s the urea, you see? The urea and the chlorine—”

“What the hell are you talking about, Professor?” Danny jerked the smaller man to get his attention. “What do we do?”

Finally the Professor’s eyes focused on Danny. He stopped smiling and undid the clasp of his belt with badly shaking fingers. “Your mask, Baker. Pee in it.”

Danny hadn’t been expecting that. “Huh?”

The Professor wriggled out of his own trousers and was preparing to do just that. “The mask. The urine will stop the—”

“Yes! Yes!” the Professor yelled. His voice was thin and reedy, but word travelled fast. Danny could hear the men behind him throwing around the Professor’s words. “That is chlorine gas out there! The ammonia in your urine will counter the gas when you breathe. Pee in your mask and put it on!”

There were mutterings and some laughter. Danny rubbed his hands over his eyes. They were burning something awful. He glanced over to see what the other men would do and was surprised to see a few of them had dropped their trousers and were doing exactly as the Professor suggested. He was less surprised to hear,

“Pee in my mask? Then put it over my face? Is he kidding?” Nervous laughter fell flat around the frozen floor of the trench. “What a loon!”

The Professor grabbed Danny’s arm. His eyes were red and teary, and his mask hung from his other hand.

The Professor pointed toward the field. Pandemonium swept through the French camp, and the British were following suit on the Canadians’ other side. Blinded soldiers ran screaming from the trenches, and the Germans mowed them down.

Trying not to think about what he was doing, Danny undid his trousers. The Professor, having already donned his mask, was nodding madly, gesturing for him to hurry up!

“You’d better be right,” he said to the Professor. “This is disgusting.”

Danny put the mask on, then took an experimental sniff. He gagged, and the Professor looked at him and tilted his head, looking bug-like behind the mask’s protruding goggles. Danny hated the mask. They all did. Uncomfortable and hot. It usually smelled as if someone had died in it. Now it reeked like someone had pissed in it just before they’d died. Claustrophobia clutched at his chest, but Danny fought the urge to rip off the mask. The men in the trench glanced at each other nervously, agitated by the growing volume of agonized screams from victims on the field and the ever-approaching stink of the cloud.

Mick looked at Danny and wrinkled his nose. “Are ye daft?”

Tommy Joyce stood on Mick’s other side, gas mask in one hand, looking skeptical. “Really?”

Danny shrugged, then pointed to the field. He didn’t bother saying anything. It was difficult to understand a word anyone said when they had their mask on anyway. And hearing anything over the din on the field would have been impossible.

“Right,” Mick said, clearing his throat and swallowing hard. “Ye’d best be right about this.”

Mick shrugged and peed into his mask. “We’ve done worse, I suppose.”

About a third of the troop did as the Professor advised. After two days, when the cloud had finally floated past, they rose from the depths and climbed to the field, taking in the devastation. The rest of the men lay scattered in the trench and on the field. Most were dead, either from having inhaled the gas, or from the unlikely mercy of German bullets. Those barely alive writhed like serpents, screaming, their mouths opening and closing like fish out of water. They couldn’t see, couldn’t swallow, couldn’t breathe. Doctors and nurses crouched by them, offering what comfort they could, sobbing with helplessness. Some of the men died with their eyes wide open, searching for the air their lungs couldn’t reach.

Danny had peeled off the mask an hour after he was told it was safe, not daring to breathe any remnants of the poison. Bodies of the dead littered the trench and he helped heave them over the top until proper burial was possible. Among the living, no one spoke.

When he’d done all he could, he walked to the spot he regularly claimed as his own and leaned against the wall, vomiting violently. Danny’s eyes flicked over the men around him, thinking about the exhaustion, the terror that ran their lives. Hating his life. Hating the world. He frowned at a lump he didn’t recognize, lying a few feet away, half-buried in mud. Danny walked over to investigate, then fell to his knees, stripped of all pride.

There was no blood. The gas hadn’t affected the sleek black coat, only every organ within it. The dog had died with her eyes open, tongue lolling from her mouth. No gas mask for Minnie.

A seed began to grow, sucking nutrients from the pit of Danny’s stomach. It set in roots and wove branches through his bloodstream, spinning rings of acid through his mind, walling him in with rigid bark that creaked constantly, whether the wind blew or not. He was a strong young tree. One that could stand up to many things and live a very long time. But a tree, nonetheless. And a tree, he knew, could be easily cut down and burned to ash.