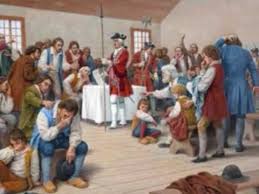 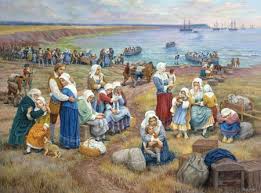 Beginning in 1604, a hardy, hopeful stream of French settlers travelled from France to North America, spreading out to cover what is now Nova Scotia, New Brunswick, Prince Edward Island, parts of eastern Québec, and parts of three New England states. For the most part they settled along the shores of the Bay of Fundy (now part of Nova Scotia) in a beautiful, fertile area known as ‘Acadie’. The native Mi’kmaq people welcomed the Acadians, taught them how to survive the unfamiliar land, and traded with them. The rare, harmonious relationship between the two races resulted in many mixed marriages.

The word ‘Acadie’ most likely stems from the Mi’kmaq word “cadie”, meaning “place of abundance”, and their new home was indeed rich with resources. The Bay of Fundy boasts the highest tidal range in the world, rising and falling every six hours, and at some times of the year the difference is more than 16 metres (52.5 feet). The Acadians saw opportunity in those tides, and their Mi’kmaq friends did not interfere when the Acadians began the astonishing work of dyking the marshes, transforming the wetlands into some of the most fertile fields in the world.

But Acadia was poorly positioned in terms of political strategy, since they sat squarely between British and French forces and were ruled in turn by both. The Acadians wished to be left alone and refused to swear allegiance to either side, earning them the name “Neutral French”. Even aft

er the Treaty of Utrecht (1713), when France was forced to cede the land to the British, the Acadians remained neutral. When Louisbourg was returned to the French in 1748, the British countered by establishing Halifax and surrounding areas as theirs. They sent a larger contingent to Acadia and reconsidered a concept from decades earlier which involved replacing the Neutral French with British Loyalists. When they discovered over two hundred “neutral” Acadians had taken part in defending Fort Beauséjour from the British, the decision was made to remove the more than 14,000 Acadians from their land of over 150 years. The Acadian Expulsion became known by many different names, including the Great Upheaval, the Great Expulsion, the Great Deportation, and Le Grand Dérangement. 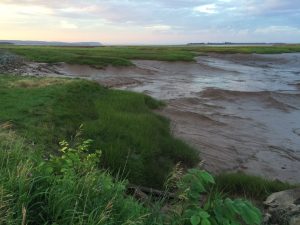 Unfortunately, by the time the “New England Planters” arrived to take over the fields, the dykes had fallen apart. To rebuild, they were forced to ask imprisoned Acadians for help. By 1764, it appeared the British attempts to colonize the area had been inadequate, and they decided to allow the Acadians back to their former lands.