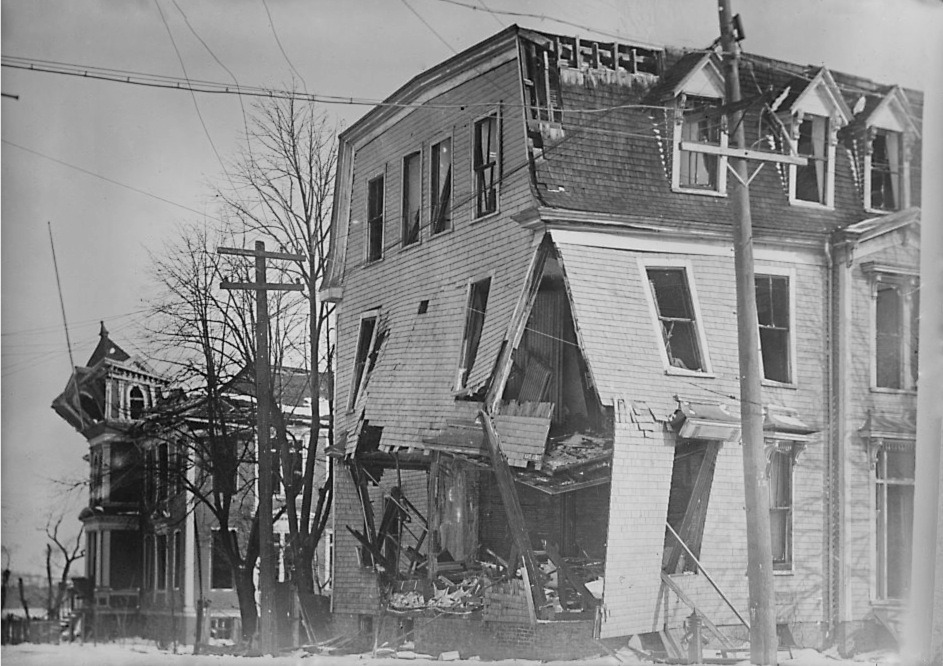 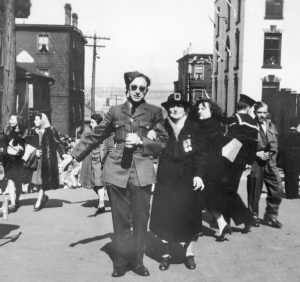 During WW1, tens of thousands of troops from Canada, the British Empire, and America passed through  the busy port of Halifax. Millions of tonnes of supplies for the war effort arrived there by rail and departed by sea. The deep port of Halifax provided a base for ships of the Royal Canadian Navy, the Royal Navy, and merchant ships from around the world. Its population of 50,000 ballooned, enjoying new jobs (including for women), a good economy, and a much busier social scene. Bootleg liquor and prostitution were in high demand.

Though the fighting never touched these shores, the war was never far away. In March 1915, one of two 12-pound warning shells fired from an army battery on McNabs Island missed the small, unauthorized steamer for which it was aiming and accidentally ploughed into the roof of a house in Halifax’s south end. Fortunately, no one was hurt. The following August, U-156 torpedoed and sank a tanker about 60 km off Chebucto Head. Hundreds of fishing boats went ashore after meeting up with U-boats, and some fishermen brought in floating mines they had found, claiming their $25 rewards. Security measures around Halifax, including blackouts, were heightened as a result. Hoping to prevent any incoming U-boats, underwater nets were strung across the harbour entrance.

But they weren’t safe enough. Traffic in the harbour was always heavy, the protected expanse of the Bedford Basin filled with merchant ships which had assembled to load up with war supplies and soldiers before coming together in convoys to head to Europe.

On the beautiful, sunny morning of December 6, 1917, the large Norwegian ship Imo, her side marked with the words “BELGIAN RELIEF”, was traveling south through the Narrows of the Halifax Harbour, having stocked up with relief supplies. Maneuvering around two earlier boats had put her on the east (Dartmouth) side of the harbour instead of on the west, where most outgoing traffic went. This meant ships were forced to pass on the Iso’s right, or starboard side instead of the usual left, or port side.

As the Imo proceeded out of the Narrows, the French munitions ship, Mont-Blanc, was on her way in. She was loaded with 2,300 tons of picric acid, 200 tons of TNT, 35 tons of high-octane gasoline, an 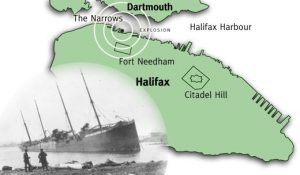 d 10 tons of gun cotton, on its way to meet up with a convoy in the Basin. Following protocol, the Mont-Blanc was coming in on the Dartmouth side of the Narrows when it came face to face with the Imo. Much waving and whistling commenced, but they were unable to avoid a collision. The Imo struck and cut a hole in the starboard bow of the Mont-Blanc, sparks hit the picric acid belowdecks, and the Mont-Blanc burst into flames. The drums of benzol (gasoline) on deck caught and shot a plume of black smoke into the air. Understanding the danger, the French-speaking sailors aboard the Mont-Blanc quickly abandoned ship and rowed towards the Dartmouth side of the harbour while the Imo began to drift towards Pier 6 on the Halifax side.

Unlike the sailors, the people of Halifax had no idea of the severity of the situation. They gathered on the docks or peered through their windows, watching the fireworks on deck. Firefighters and sailors from other ships headed towards the burning ship. Vincent Coleman, a railway dispatcher in the nearby railway yards, was responsible for the rail traffic going in and out of the Halifax peninsula. Seeing the impending danger, he telegraphed “Munitions ship on fire. Making for Pier 6. Goodbye,” hoping to stop an incoming train from Saint John NB with hundreds of people on board. It was his final message and the first time the world heard about the disaster in Halifax. 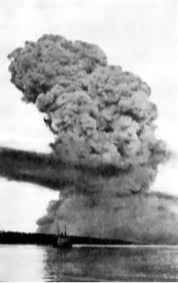 Twenty-one minutes after the collision, at 9:04 am, the Mont-Blanc exploded, producing the largest man-made explosion prior to the atomic bomb. A shock wave was followed by a tsunami that washed over both sides of the harbour, and 2.5 km2 of homes, offices, churches, factories, ships, a large sugar refinery, the railway station and freight yards, and the Royal Naval College of Canada, were levelled. Hundreds of people were obliterated, thrown through the air, maimed, burned, or blinded—one in fifty suffered significant eye damage—as windows shattered throughout the city and as far as 100km away. Ceilings and roofs of houses still standing collapsed onto their owners, and floors dropped, crushing families underneath. The Mont-Blanc was vapourized, and part of its anchor flew nearly 4km away. The Imo landed on the Dartmouth shoreline.

Approximately 1600 people died instantly, including hundreds of children who had gathered to watch the spectacle on the water. About 400 more died from injuries in the following days. The number of de 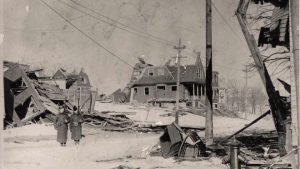 ad was eventually revised to 1946. The Mi’kmaq settlement at Turtle Grove was completely destroyed, as were the railway yards and a number of large piers. More than 1500 buildings were destroyed, 12,000 damaged. 25,000 people were left homeless. Trees and telegraph poles snapped, houses splintered, split, collapsed, or burned.

The next morning it began to snow, submerging the city in 40 cm of snow and leaving thousands in the cold. Snow buried many survivors, and rescue operations were badly hampered by the snow.