It could be difficult, in a world gone insane, for a man to hold onto reality when madness beckoned so strongly. This battle scene is different from the one which I eventually chose for the novel, because in this one, Danny’s friends Jimmy and Fred had already died, leaving Danny to fend for himself at the Front. He clung to a very thin lifeline, using Audrey’s picture as a kind of good luck charm, touching it before they went over the top.
This was the original scene, just after Jimmy and Fred had been killed. 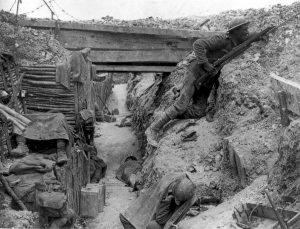 Bullets buried themselves doop doop doop in the ooze, ringing against endless webs of twisted barbed wire flagged by shredded uniforms and bits of men. Danny took a last look at Jimmy, stretched out like he used to lie when they’d stayed up late to watch shooting stars over the black Atlantic. Now he lay uncaring in a metal hailstorm, his open eyes aimed beyond the sky.

Danny wanted to stay, wanted to be with Jimmy, but something in his mind dragged him back to the trench. He rolled in and slid onto the muddy floor, then reached into his pocket for Audrey’s picture. He cradled in his hands while he cried, forgiving her for letting his best friends go, pleading with her to protect him. When the last of the sobs died away, he studied her picture again, wishing so badly she could be there, hold him, help him find some kind of sanity again. One filthy fingertip traced the line of her hair, touched her baby soft cheek.

“I’m sorry, Audrey. It’s not your fault,” he whispered.

She was just a girl, and she had no place in this mess. Nevertheless, when he closed his eyes that night to try and sleep, he said a little prayer that she’d watch over him still.

Danny tried to keep busy when he wasn’t fighting. Tried to keep his mind occupied with things other than death and Audrey. One of the guys told him women had no place on the front line. No place at all.

“You think about a gal while you’re out there, you’ll never see her again.”

But he couldn’t banish her all the time. She was all he had left.

Danny worked hard, shovelling in the trench, filling sandbags, carrying ammo and other supplies where they needed to go, cleaning and oiling his Ross, hoping it wouldn’t self-destruct in his hands as it had with some of the other guys. Each man had to do two hours of guard duty every night. Sometimes those nights went well into the next day, because often the dead of night was the best time to surprise the enemy. Sometimes nothing happened, and all the men battled were the lids falling closed over their bloodshot eyes. Rain had set in a couple of days before, and his section of the trench pooled with putrid, muddy water so his boots made sucking noises when he walked.
Danny scratched his arms with shredded nails. Lice scraped off, but the blood never did. Not all of it. Guess that’s where the word bloodstain came from. He picked at the grime, caked on layers thick. Everything about him was filthy. His body, his thoughts. No matter how much he cleaned, no matter how much he tried to shut it out, Jimmy’s blood stuck to his hands, to his uniform, to his guts.

He was losing his mind day by day. He could feel it. Some days the tide took it out and Danny didn’t think at all. At other times it rushed in like the sea, filling in the holes and crevices, washing dead things and other debris onto the shore of his mind. Would it be better to go crazy and live in a world that never felt quite right? Or would it be quicker, easier to just stand out there, arms raised and let himself be shot a hundred times? He’d thought about that, as the officers pointed revolvers at their own men, screaming for them to go over the top or they’d shoot them themselves. He’d thought it might not be a bad option. But he’d seen what bullets and shrapnel did. He’d seen the insides of men’s skulls, the mashed grey remnants of a man’s thoughts open to the sky. He didn’t think he could voluntarily give up his body to that possibility. Had the dead men gone mad before that moment? Did they see the bullet? Did they feel the hot, stinking air kissing their torn intestines goodbye as they died? Could they smell their own impending rot?

One by one, Danny watched his buddies sink into the mud. Saw their chests explode, their bodies quiver and stop. And he found that after a while it hurt less, seeing them fall. Like he’d developed a bullet-proof shell around his emotions. On some level, it bothered him that killing had gotten so much easier for him to do. Hearing the thud of torn bodies hitting the earth, aiming his own rifle at someone’s husband, son, or father and ending everything for them—well, that was getting far too easy. He rarely felt anything but exhaustion afterwards.